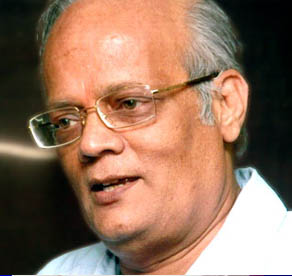 Mr. Rajan was born in year 1942 in a small village in Tamil Nadu. After acquiring a degree in commerce in 1962 from R. A. Podar College, Mumbai & a Diploma in advertising from Rajendra Prasad College of Mass Communication, Mumbai – he grew professionally through industry, energy and sheer audacity in venturing and adventuring into new territories and frontiers.

He not merely made an enduring impact in the glitzy world of advertising, which he took up as a career in 1964, but over the years he also helped build institutions serving the cause of media research, rural marketing, public relations, newspaper publishing, and advertising education,

After an event-packed career start in Bombay (Clarion McCann) and later with the multinational Kenyon Eckhart. Rajan became the CEO of a national ad agency, Advertising Consults India Ltd or ACIL, a sister company of Clarion at age of 31.

Moving to Chennai in 1974 to rejoin Grant Kenyon Eckhart, Mr. Rajan founded his own agency, Anugrah Marketing in 1986. He is a pioneer in rural marketing. At one time, rural marketing meant selling seeds and fertilizers to farmers. Rajan showed that rural India can be a lucrative market for TV sets and refrigerators and all the gadgets that urban India loves.

He gradually developed a reputation for rural communication, on the basis of his contributions to several agriculture-based clients such as Shaw Wallace, EID Parry, BASF and the MRF Farm Tyre Division.

Mr. Rajan served for four years as the Founder President of the Rural Marketing Association of India (RMAI). In 2009, the association honoured him with its first Life Time Achievement award.

His flair for institution-building, problem-shooting and documentation was tapped by voluntary organizations such as Round Table India and Rotary International as well as by professional bodies such as the Singapore-based AMIC (Asian Media and Research Centre), PRSI (Public Relations Society of India), AAAI (Advertising Agencies Association of India), and Ad-Club Madras. While heading the Ad Club (1993-95) he started the first ever professional post-graduate diploma course in advertising by any Ad Club in the country, which has been running successfully for 25 years.

Mr. Rajan was the India representative and later Board member of the Singapore-based AMIC, the Asian Mass Communication Information and Research Centre for around 25 years. Through AMIC, he brought to India IFRA, a Germany-based newspaper technology organization. He was the managing director of IFRA India for many years and steered its growth in the country while simultaneously managing Anugrah Madison. IFRA honoured him with an Outstanding Service Award in 2009.

Post retirement Mr. Rajan has taken to writing seriously. His first book was his autobiography titled ‘Courage my Companion’, published in 2009. It is considered an uncommon autobiography of a common man. It traces his life story as a boy from a lower middle class family brought up in the chawls of Mumbai to his phenomenal success as an adman and socially conscious human being. Since then he has published nine books in ten years which includes a book on Rural marketing, two books containing collection of his essays and a collection of his short stories.

He writes a regular column in Adyar Times called `Rajan`s Random Reflections` besides being a regular blogger, his articles have also been published by leading Chennai based dailies and periodicals and other national magazines.

Based in Chennai, 77 years young Rajan is thoroughly enjoying his new Avathar as a writer/author. He is currently writing a novel which he hopes to publish soon.